Description of the activities
Design and engineering of the temporary works. Preparations and execution of floatation, transport and immersion of 5 tunnel elements in the Shannon, Limerick, Ireland. 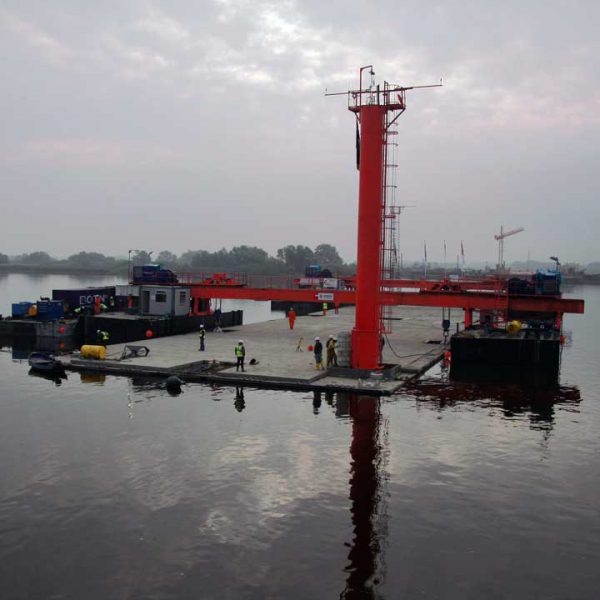 The 5 tunnel elements of the Shannon tunnel in Limerick were constructed at the same time in a casting basin situated in the northern approach, the 1st element was situated nearest to the river and the 5th was furthest away from it. After completion of the tunnel elements the basin was flooded and the elements were kept on the bottom of the basin by filling the ballast tanks.

The immersions were done at a rate of one element per week and were strongly dependent on the tidal window. The tidal water level difference could be up to 5,5m at spring tide. Therefor floatation and immersion had to be done in one session, if not the tunnel elements would run aground in the casting basin at low water. For the last tunnel element special attention was required because of the large transport distance. To gain time this element was temporary immersed on its secondary supports at a distance of 1,5m from its final position. The two rear support pins were extracted and the element was set down by the lowering water level. At upcoming tide the element floated up again and the final immersion continued. In final position the rear end of this fifth element protruded above water at low water.Vul hier de specialism text in

Linked to the large tidal water level differences were the high current flows at the immersion site. A transversal winching system was used to keep the tunnel elements in place. Because of environmental issues, the transverse winches could not be located on the banks at a larger distance of the construction side. They were located on a platform near the cofferdam of the casting basins and the wires were redirected towards the tunnel elements by anchor points in the river.

The foundation of the Limerick tunnel was created by sand flowing and a dry closure joint was created so the northern approach could be built directly connected to the last tunnel element.

We made a leaflet with all the information about the project. Easy to share or to store.